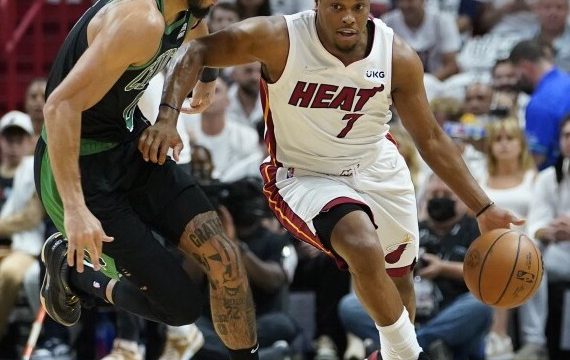 The Golden State Warriors stamped their ticket to the NBA Finals for the sixth time since 2015 last night and await their matchup, but all signs point toward the Celtics sealing the deal at home in Game 6 this evening. We’ll be diving into this matchup and bringing you our two best NBA props for tonight.

The Celtics host the Heat at 8:30 PM ET. With the Celts holding a 3-2 series lead, they’ll be guaranteed a June 2nd contest in San Francisco with a win tonight. They enter as 8.5-point favorites, and the road ahead looks like quite a rough one for the Heat.

We easily cashed on a Kyle Lowry under in Game 5, and we’ll be going back to the Miami point guard this evening. His age is showing against a stingy Boston defense, and his lines are still set a bit higher than they should be for Game 6.

We’ll also be targeting Jayson Tatum tonight. JT has benefitted from Miami’s poor offense and incredibly poor shooting. And, at home, there’s value on him to crash the glass aggressively yet again.

I’m 13-2 in my last 15 article plays with Bet The Prop – let’s keep it rolling with some wins tonight!

Meanwhile, BTP is up 14 units on MLB K props — join us to get full slates of MLB props (plus NBA, PGA, UFC F1, and more!) alerted to your device.

Kyle Lowry was awful on Wednesday night. There’s no way around it.

The former Raptor played 25 minutes, but you wouldn’t know it by looking at his final stat line. He finished with 0 points and 3 turnovers, shooting 0/6 from the field and 0/5 from three.

This abysmal performance wasn’t a surprise, however. Lowry finished with only 3 points in Game 4, shooting 1/6 from the field and 1/3 from downtown. He’s reaching new lows for starting point guard play this postseason, and I’m expecting his struggles to continue this evening.

I’m not trying to disrespect Lowry in this article, but I don’t think I’ve ever seen a weaker playoff run from a starting PG on a contender. Over his six most recent games, Lowry has only made one trip to the free-throw line. This stretch includes two scoreless games and only one game with more than 6 points.

The Villanova product is scoring just 4.3 PPG over his last six games. The volume isn’t there for him, and his aggressiveness is simultaneously fading.

Lowry is basically playing on one leg for Miami, which is not a winning recipe at age 36. He’s been in and out of the lineup for a month, missing eight of Miami’s last 14 playoff games due to his hamstring issue. Between his lingering injury issues, poor play, and Tyler Herro‘s potential return to the lineup, it wouldn’t be a surprise if K-Low operates in a decreased role tonight.

Gabe Vincent scored 15 points in Game 5 and looked far better than Lowry. Caleb Martin and Victor Oladipo have also earned their fair share of playing time off the bench for the Heat. Plus, Duncan Robinson is part of the team’s rotation again. If Tyler Herro returns from his two-game absence in Game 6, a decrease in Lowry’s playing time could be in the works.

Lowry is logging 25 minutes per game across his three games this series. It’s difficult to envision him seeing more time than Vincent or Herro (if active) tonight. So, a proper projection should have the aging vet in the range of 20-22 minutes of action tonight.

The Celtics’ defense seems to reach new heights each and every night. After shutting down the Nets and Bucks in the opening rounds, they’ve given the Heat nightmares over the last ten days. Miami posted a 113.7 Offensive Rating in the regular season, but they’re scoring just 105.6 points per 100 possessions this series.

Lowry scored 51.2% of his points from behind the three-point line in the regular season and 53.3% this postseason. Unfortunately for him, the Celts are allowing their opponents to hit just 31.6% of their threes this postseason. It will be tough for the former All-Star to get going on the road tonight.

This is a simple play for the rising superstar. The Boston Celtics are heavily reliant on Jayson Tatum in their biggest postseason games. A close-out game at home with a Finals appearance on the line fits the description. After playing 44.5 minutes in Wednesday’s Game 5 victory, we can expect another 40+ minutes for Tatum.

The aforementioned elite Celtics defense also increases Tatum’s rebounding opportunities. More missed jumpers from Miami – which should be abundant – result in more rebound chances for JT. He’s hit this line with regularity all season long when seeing enough action, and tonight should be no different.

Including the postseason, this mark remains at 8.1 RPG when he sees at least 36 minutes of action. And, going back to last season, he grabbed at least 7 boards in over two-thirds of his games when seeing at least 36 minutes. Unless the Celts win tonight’s contest by 30-plus points, Tatum should be in for a minimum of 36 minutes and he’ll likely see this figure creep up into the 40s.

Boston’s defensive game plan is to force Miami into taking plenty of threes. Notably, the C’s are forcing Miami’s weaker shooters to take more. This is a primary contributor to the Celts winning the rebounding battle this series, as they’ve out-rebounded the Heat by 26 through five games.

Tatum has been active on the glass against Miami all season long. He’s rarely tasked with guarding one of Max Strus or Duncan Robinson, so he’s often able to position himself for plenty of rebound opportunities.

The former Duke Blue Devil is averaging 8.0 RPG across 8 contests vs. Miami this season. And, with a per-game average of 7.8 RPG in the series, this line is set a full board short of where it should be for Game 6.

Kyle Lowry has fallen off a cliff this postseason, while Jayson Tatum has enjoyed his rise to superstardom. The stage is perfectly set for Lowry to disappoint yet again, while Tatum is in a position to carry his squad to the NBA Finals. Look for the Celtics and their league-best defensive unit to seal the deal in Game 6 tonight.