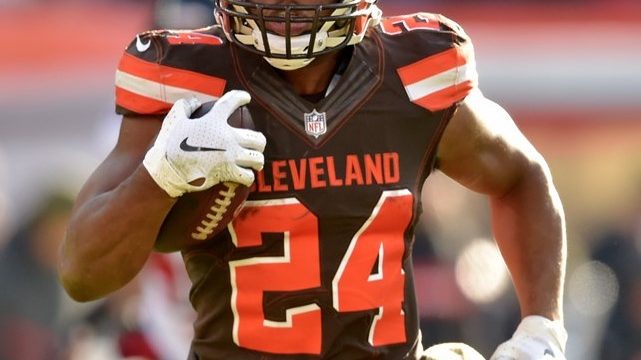 With the 2022 edition of the NFL season rapidly approaching, we’re hard at work. We still have a few days left to squeeze as much value out of the futures market as possible.

ICYMI: make sure to check out our previous NFL Futures Picks article, which focused on the best wide receiver values in 2022.

If you’re looking to target some running backs, you’re in luck today! We have a few unders that are too good to pass up, highlighted by high-profile running backs Nick Chubb and Christian McCaffrey. Let’s jump into the picks!

The BTP team already has 7 plays locked in for Week 1 — Join us for the entire season to get all our picks alerted to your device.

Nick Chubb is a fantastic football player, but that doesn’t mean he’ll be a touchdown machine in Cleveland this year. He’s finished under this mark in three of his four career seasons, scoring exactly 8 touchdowns in each of those three under seasons.

Chubb has only averaged 9.0 rushing touchdowns per season in his four professional seasons, and Cleveland’s offense could struggle quite a bit in 2022.

Let’s take a look at Chubb’s lone 12-touchdown season. His scoring was a byproduct of playing in the best offense he’s ever been a part of. Cleveland put up 25.5 points per game in 2020, good for the 14th-ranked offense in the NFL that season. Compare this outlier of a Cleveland Browns season to the other three Browns teams Nick Chubb has been a part of:

With Jacoby Brissett running Cleveland’s offense for the next three months, there may not be an abundance of scoring chances for Nick Chubb and the rest of the Browns. The chances of Head Coach Kevin Stefanski‘s squad being a fringe top-20 offense are far higher than the chances of Cleveland being an above-average offense.

A weaker Browns offensive unit may also result in a larger workload for Kareem Hunt, too. Cleveland likes to rotate their running backs, evidenced by Chubb’s 49% and 53% snap shares over the last two seasons. With the Browns expected to play from behind more often than not, look for Hunt to see a heavy dosage of passing down involvement this season.

Due to concerns over Cleveland’s offense, the backfield workload split, and injury risk, the under is an easy pick for Nick Chubb’s Rushing TD total in 2022. I have Chubb projected to run in eight or nine touchdowns, and 11-plus scores on the ground this season would certainly be a surprise.

Much like Nick Chubb, Christian McCaffrey is an ultra-talented NFL player. However, CMC obviously comes with some injury concerns.

He’s played only 10 games out of a possible 33 over the last two seasons.

The Stanford product has scored 30 rushing touchdowns in his 58 career games. That boils down to 8.8 rushing touchdowns per 17 games. So, even if he miraculously remains healthy for the entire season, he’s far from a guarantee to run in nine-plus touchdowns in 2022. Even if the superstar RB makes it through 13 or 14 games fully healthy, I still love the value on the under.

Furthermore, McCaffrey has recorded an insane 81.5% snap share throughout the first five years of his career. As Carolina tries to preserve their most talented player, expect CMC to play closer to 70% of the team’s offensive snaps in 2022. His receiving workload should remain sky-high, but I’d expect the Panthers to distribute some carries to D’Onta Foreman and Chuba Hubbard.

If Christian McCaffrey can’t remain healthy for an entire 17-game season, the under has immense value for his rushing touchdown total. And, let’s not pretend Baker Mayfield is amazing. In a Carolina offense that projects to be below average, the former All-Pro RB likely won’t see enough goal-line looks to score a ton of touchdowns on the ground in 2022.

There are plenty of questions surrounding Nick Chubb and Christian McCaffrey in their respective offenses this season, which consequently gives us a ton of value on their unders. So, hammer these unders and profit on the struggles of Jacoby Brissett and Baker Mayfield!

Enjoy playing these NFL Futures Picks and Join us for the whole NFL season!