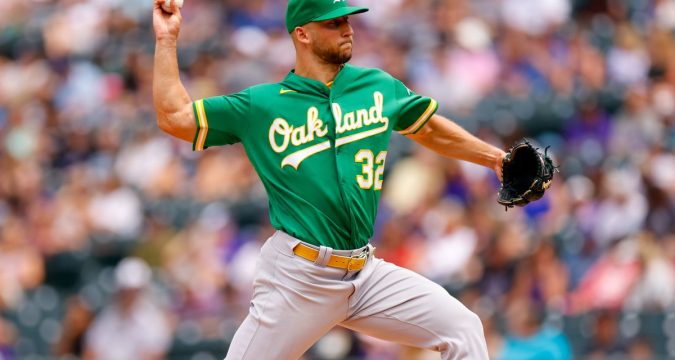 A struggling James Kaprielian takes to the mound against the Mariners, and he’s a top target as we break down one of our best MLB strikeout props for today.

The sophomore is slumping badly in his second season, and while the Mariners aren’t exactly a menacing matchup, they have been sneaky great on K props all year. Let’s dive in.

NBA may be over, but our MLB K props are just getting started — 15-5 over the past week and now +24 units on the year. Join us here to get daily slates, plus PGA, UFC, F1 & more, altered to your device.

It’s a lot of juice – more than we ever really like to play – but we still see value here, given Kap’s poor sophomore form and the matchup.

He’s hit this number in just two of his nine starts, going under in five straight with a max of three strikeouts. 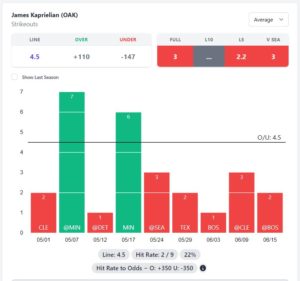 There’s nothing evident in his underlying numbers to suggest that a turnaround is imminent: Kap ranks:

Seattle is a strange opponent when it comes to K props.

They’re the definition of mediocre in the strikeout department with just the 15th-best team K% on the season and rank 26th in runs scored.

However, if you dig a little deeper you’ll find they have the 8th-best Swinging Strike rate, a metric that we’ve found to be the most predictive when it comes to strikeouts. They also own the 10th-best wRC+ on the year, suggesting their lineup packs more of a punch than the counting numbers would suggest.

The combination of solid underlying numbers and the public perception of a poor offense has made the Mariners an incredible value for under bettors this year:

Giving playable 4.5 lines to Kaprielian at this point is a little generous, particularly in a sneaky-tough matchup.

In this case, the juice is worth the squeeze.