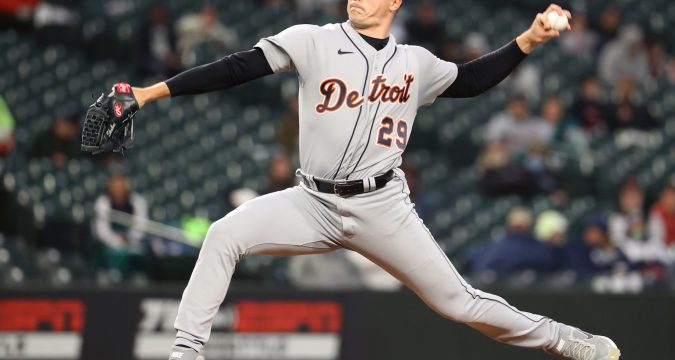 Tarik Skubal takes on the Giants, and it’s a bounceback spot for the talented 25-year-old and one of our favorite MLB Pitching Outs props from Tuesday’s slate.

In his third season, the big lefty is recording career-bests in xERA, xSLG, and xBA, as well as his best BB% rate to date.

Kubal has been more efficient than ever, yet he’s fallen short in some tough matchups of late, presenting a nice value opportunity today.

We handed you a winner the last time out and are looking to stay hot on article plays.

We’ve handed out one other MLB pitching outs prop in our subscriber Slack community so far today — join us here to get all our picks across every sport.

Skubal has hit a bit of a rough patch of late, but it’s correlated to pitching against some of the hottest offenses in baseball in Toronto and Boston, and then a Texas team that mashes lefties.

All three of those lineups boast top-six rankings in wRC+ vs LHP this season.

Prior to that though, he cleared this number in six of seven, and nothing in his peripherals suggest he’s pitching significantly worse than he was during that stretch. 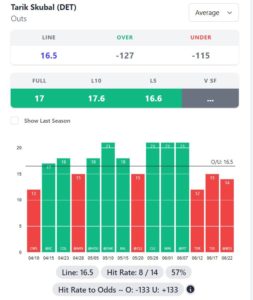 This is about as low a number as you will see for Skubal.

It’s the first time we’ve seen a 16.5 for him since the start of the season, a time when pitchers are more limited and numbers are lower in general.

So today’s line is definitely weighted by recent performances since he was getting O/Us of 17.5 before, even against good teams.

The Giants have been in the neighborhood of league average vs LHP, but they’ve also been allowing Overs at a 60% clip on Pitching Outs props.

The Giants also have the third-highest K% over the past 30 days, so the strikeout prop alternative is definitely in play as well — San Francisco is a whopping 18-5 to the over in their last 23 games.

This is a good spot for Skubal to bounce back tonight, and we’ll take the recency–bias discount.