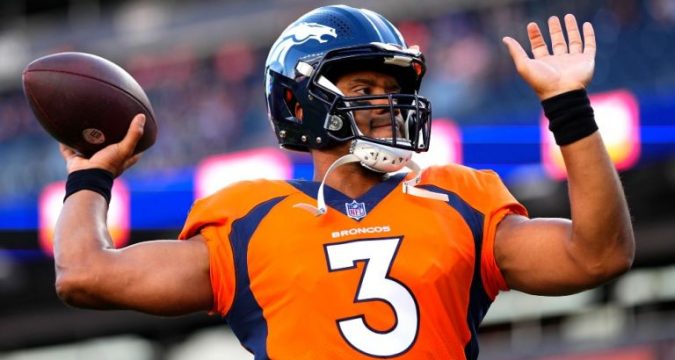 Russell Wilson has always thrown a dazzling deep ball, and that downfield acumen is the angle as we break down one of our favorite MNF props for Broncos Seahawks.

As he did in Seattle, Russ has a few downfield weapons in Courtland Sutton and Jerry Jeudy who can go get the deep ball, along with an athletic TE in Albert Okwuegbunam who’s capable of ripping off chunks of yards after the catch.

Wilson’s Longest Completion prop is one of our favorite looks from Monday Night Football. Here’s why.

Despite battling a “mallet finger” injury for a good chunk of last year, Wilson still finished second among all qualified QBs with an average depth of target of 9.89.

He went over this number on Longest Completion in 9 of 14 games last year, with an average Long Completion of 42.8 yards. His five misses were all excusable against some of the league’s top secondaries: San Francisco (2x), Green Bay, and the Rams, along with another game where he left early with an injury.

The year before that, he hit this prop in 10 of 16 starts, giving him a 65% hit rate over the last two seasons. Wilson has always been one of the best deep-ball throwers in the league.

Per NFL Next-Gen stats, his passer rating on balls thrown 20+ yards downfield was well above average across the board, with a monster 130 rating on deep passes to the right, where the league average is just 78.5. 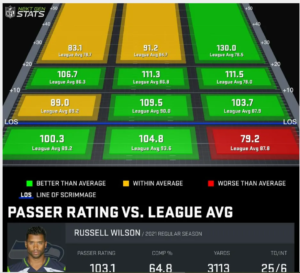 The Broncos gave Wilson a massive new contract and will presumably play to his strengths.

Their offensive personnel is set up well to let him do that. Look for the Broncos to establish the run with their two strong RBs in Javonte Williams and Melvin Gordon, then use play-action to take their shots downfield. This should shape up as a similar offense to the one he operated in Seattle, only with a greater willingness to #LetRussCook now that he’s paid.

“Those are things where you’re always trying to get that run, get them stepping up, get them thinking and guessing,” said new Broncos Head Coach Nathaniel Hackett this summer regarding his offensive scheme. “Then you have a chance to get those deep shots behind them, which we all love the most.”

Of course, we have the #RevengeGame narrative on our side as well, with Wilson returning to Seattle to face his old team. And even if that narrative doesn’t work out, we have potential play volume on our side.

Seattle’s opponents ran (by far) more plays than any other team last year, so we might get a volume bump too.

Russ is an elite downfield thrower and the Broncos are likely to play to his strengths, considering how much they’ve invested in him.