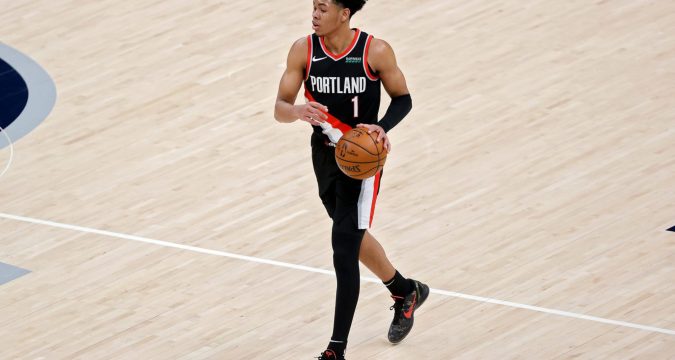 We have a fantastic Tuesday NBA slate this evening, which gives a ton of angles on our NBA props for tonight.

The Portland Trail Blazers are hosting the Orlando Magic  — tip-off is at 10:00 PM ET. The Blazers have recently traded away much of their starting backcourt, leaving Anfernee Simons to run the show against Orlando tonight.

Meanwhile, the Brooklyn Nets will be playing host to the Boston Celtics. This one tips off at 7:30 PM ET, as Patty Mills will take on increased responsibilities in the absence of Brooklyn’s big three.

I’m 11-9 on NBA article plays with Bet The Prop this season, and looking to improve on that record with a pair of wins tonight!

Overall the team at Bet the Prop is hitting 63% on NBA props this year — and with NFL winding down, it’s a great time to join us to get full slates of NBA props (plus PGA, NHL, and more!) alerted to your device.

Anfernee Simons is the lone wolf in Portland’s backcourt for the time being. CJ McCollum was traded to New Orleans this morning. Damian Lillard remains on the shelf indefinitely with an abdominal injury. Norman Powell and Robert Covington were recently sent to the Clippers, while new acquisitions such as Eric Bledsoe and Josh Hart will not yet be available for Portland. This leaves an insanely large playmaking load for Simons against a struggling Magic squad tonight.

Simons is enjoying a stellar breakout season for the Blazers, who currently occupy the 11th seed in the West and are diving into tank mode. He has thrived in the absence of Lillard and McCollum and will be in a similar lead role this evening.

The 22-year-old guard has over 5.5 assists in all six games with both Dame and CJ sidelined, averaging 8.2 APG in these games.

Aside from the 4th-year guard’s scoring prowess on high volume, Simons’ playmaking chops have been on full display when Portland Head Coach Chauncey Billups grants him the keys to the offense.

He’s averaging 16.2 potential assists per game in this six-game sample, with 15-plus assist opportunities in five of six games. To reach the 6 dimes we need from Simons tonight, this level of distributing volume will more than suffice.

The 12-43 Orlando Magic are making the cross-country trip to face Simons and the Blazers tonight, which bodes well for the young guard’s playmaking potential.

Orlando isn’t exceptionally bad defensively, but they’re certainly weak enough to send plenty of open shots in Portland’s way. Orlando is the NBA’s 23rd-ranked defense, sporting a 112.5 defensive rating. The Magic are also giving up 24.7 APG, good for 12th most in the league.

They allowed each of Lance Stephenson and Killian Hayes to clear the 5.5-assist mark in less than 25 minutes of action just last week. And, the Magic are giving up a lofty 26.8 assists per game over their last five contests, good for 7th most in the NBA.

Simons will handle the ball as much as physically possible tonight against a far-from-intimidating defensive unit. He even has the potential to flirt with double-double numbers in this one.

Patty Mills and the Nets are in a similar situation to the Trail Blazers tonight. However, Brooklyn’s depleted roster is not trade-related. Kevin Durant, James Harden, and Kyrie Irving will all be inactive tonight, leaving Mills as a likely candidate to be the primary playmaker in Brooklyn’s offense.

Mills has only experienced the good fortune of playing without the Nets’ superstar trio twice this season. However, he did not disappoint in this pair of outings:

The Australian native also managed to log 36.5 minutes per game across these two nights.

Cam Thomas will be the only other Nets guard capable of creating shots off the bounce for himself and his teammates tonight. But, the rookie clearly has a score-first mentality. He’s a higher usage scorer than Mills and has just a 9.3% assist rate, compared to Mills’ 11.6% this year and 16.9% for his career.

All signs point to the 33-year-old guard finishing as the Nets’ assist-leader tonight, which gives us some awesome value on this over.

Anfernee Simons will have free reign over the Portland offense tonight and should have plenty of opportunities to rack up assists against an abysmal Orlando squad.

And, Patty Mills is similarly alone as the top distributor for the Nets, as they look to take down the Celtics at home.

Have fun with these NBA Props for tonight and join us for the remainder of the NBA season!