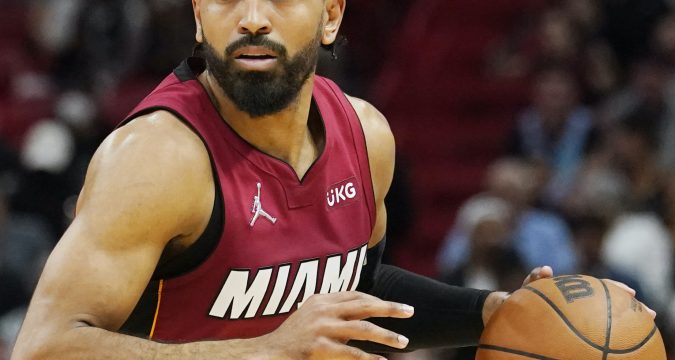 The NBA playoffs have officially heated up. Three of the league’s four second-round series are knotted up at 2-2, which means some Game 7 action is right around the corner. The Sixers and Heat begin what is now a Best of 3 series, as the two teams are each undefeated at home. We’ll be diving into this matchup and bringing you the best of our NBA props for tonight.

The Philadelphia 76ers have come storming back into this series against the Miami Heat after falling down 0-2. The two squads head back to Miami this evening, where each side aims to take a 3-2 series lead. This one tips off at 7:30 PM ET.

Jimmy Butler and Joel Embiid have undoubtedly been the most dominant players in the series. But, in Kyle Lowry‘s absence, some role players will be asked to step up in a big way for the Heat. We’re locking in on Gabe Vincent in particular, as he’s expected to draw the start in Lowry’s place tonight.

I’m 9-1 in my last ten article plays with Bet The Prop – let’s keep it rolling with a win tonight!

Gabe Vincent is the latest installment of the Miami Heat’s undrafted role players collection. The team has a whopping eight undrafted NBA players on its playoff roster (15 total players). This is the league’s highest total by a mile. And, despite other contributors like Max Strus and Duncan Robinson, it’s Vincent that leads the charge, especially when Kyle Lowry is sidelined.

The UC Santa Barbara product had a hard time finding his way into the rotation last season. Vincent’s struggle to see consistent minutes carried over into the beginning of the 2021-22 campaign. But, with a 36-year-old point guard in front of him, rest and injuries were nearly a certainty at some point. That’s where Vincent made his mark, and his hard work will be on full display in a pivotal Game 5 this evening.

The 25-year-old guard obviously saw a significant increase in production when he was inserted into Miami’s starting five this season. Even in the postseason, Vincent has maintained his stellar play in a larger role.

He averaged 18.5 Points + Rebounds + Assists per game when starting in the regular season. And, he’s posted 16.1 PRA per game in these playoffs. More importantly, Vincent is all but guaranteed to see at least 28-30 minutes without Lowry in a high-stakes matchup. This bodes extraordinarily well for this over, as he notched at least 15 PRA in 34 of 41 games when seeing at least 25 minutes this season.

Vincent has started 18 games with Lowry on the shelf since January 1st. He’s reached the over on this line in 14 of these 18 games, averaging 18.3 PRA per game. This sample includes hits in 3 of 4 playoff games without Lowry.

Vincent will stay in the lineup tonight thanks to his two-way ability. He defends opposing ball-handlers far better than Duncan Robinson and Tyler Herro. And, he is far more consistent offensively than Caleb Martin and even Victor Oladipo.

Head Coach Erik Spoelstra will count on the 25-year-old down the stretch, as Miami searches for stable offensive options who can also hang with James Harden and Tyrese Maxey on the other end.

Because of his reliability, Vincent will remain locked into the 28-30 minutes of playing time that he’s been seeing without Lowry these playoffs. Sportsbooks seem to have under-corrected for his new role, as Vincent averages 17.6 PRA per 30 minutes this season, more than 20% higher than his 14.5 over/under.

Dating back to last season, Gabe Vincent has enjoyed legitimate success against the Sixers.

He’s reached the 15-PRA mark in 5 of 6 games when seeing at least 20 minutes of action against Philly in his career. And, he’s averaging 23.2 PRA per game across these contests.

The Sixers will be hyper-focused on containing Butler tonight, which will make way for Vincent to find several open looks in Game 5.

Vincent will be relied upon to fill in for Lowry and should play around 30 minutes in Miami’s backcourt this evening. He’s thrived all season long when seeing sufficient playing time, and we’re riding that rock-solid trend into Game 5.