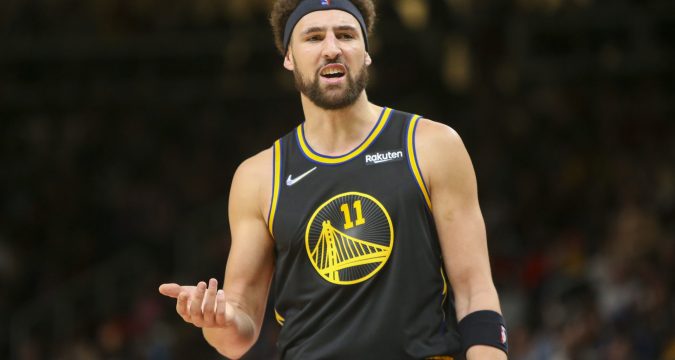 The NBA has produced nothing but blowouts over the last ten days, as we get closer and closer to the NBA Finals. Hopefully, we see some exciting action in Game 2 of the Warriors-Mavericks series this evening. We’ll be diving into this matchup and bringing you the best of our NBA props for tonight.

The Golden State Warriors are hosting the Dallas Mavericks at the Chase Center in San Francisco tonight. This one tips off at 9:00 PM ET. Dallas couldn’t hit a shot in Game 1 as Golden State demolished the Mavs on Wednesday night. But, with some positive regression likely coming for the road team this evening, we should see a closer game.

The Warriors’ offense is driven by the “Splash Brothers” (Stephen Curry and Klay Thompson) and their incredible shooting. We’re going to be locking in on Klay in a tough matchup against the Mavs this evening.

Klay Thompson could retire today and he’d be a Hall of Famer. His resumé speaks for itself, and he’s arguably one of the two greatest shooters in the history of basketball, alongside Stephen Curry.

However, Thompson isn’t the elite player he once was. Klay is still quite productive for Golden State, but he’s seen a noticeable drop-off in his effectiveness after returning from two serious injuries.

The 32-year-old finally made his return to NBA basketball in January after a lengthy 941-day layoff due to his injury recovery. Thompson tore his ACL in the 2019 NBA Finals and then suffered a torn Achilles one year later. His bounce-back story has been incredible, but he’s not the same scorer he once was.

Klay has taken an obvious backseat to Curry in Golden State’s offense. But, he also has to share opportunities with Jordan Poole and Andrew Wiggins in a loaded offensive attack. Additionally, the Mavs present a difficult matchup for Klay and the Warriors. So, all signs point to an under in tonight’s contest.

Thompson has appeared in each of Golden State’s 12 games this postseason. After notching only 24 PRA in Game 1, he has remained under this line 8 of these 12 games.

Klay is averaging just 26.6 PRA in 35 minutes of action in these playoffs. This is a steep decrease from his average of 32.2 PRA per 35 minutes in the regular season.

There are several factors that can explain a smaller expected scoring load for the 6-foot-6 sharpshooter. First off, Klay has to split touches with Curry, Poole, and Wiggins in Golden State’s offense. Second, the team’s pace of play has slowed down in heated playoff battles. And third, Dallas has one of the NBA’s premier perimeter defenses.

Some of Klay’s numbers toward the end of the regular season were boosted due to Steph Curry’s extended absence from the lineup. Steph missed the team’s final 12 games due to an ankle injury, which resulted in the offense running through Klay. However, the Warriors’ attack will always be hyper-focused around Steph when he’s in, and that leads to fewer shots for Klay.

The Washington State product’s usage rate dips to just 27.0% when he’s on the floor with Steph this season. And, in the postseason, Klay has seen a much sharper decrease in volume, as his USG% sits at just 23.5% in his 12 postseason games.

The Dallas Mavericks have been one of the NBA’s elite defenses this season, especially on the perimeter. Mavs Head Coach Jason Kidd has done an excellent job transforming Dallas’ defense from the 13th-ranked unit before January 1st to the league’s 4th best unit since January 1st. This is due, in large part, to their three-point defense.

The Warriors took only 29 threes in Game 1, which was their 2nd-fewest in 94 games this season. Their only game with fewer three-point attempts came in January when they took only 28 – also against the Mavericks.

It’s clear that Dallas plans to limit Golden State’s volume from deep, which hurts Klay Thompson as much as anyone.

Klay Thompson has remained below this PRA line in 75% of his postseason games. And, in an extraordinarily difficult matchup against the relentless Mavs, it will be tough for him to reach the over tonight.