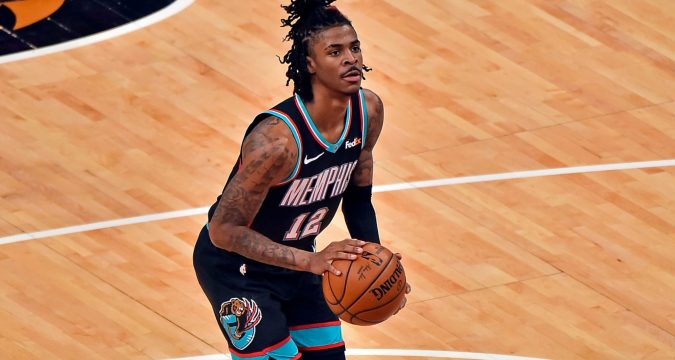 Each of the NBA’s second-round matchups is one game into their respective series after Monday night’s action. We’re getting our first batch of Game 2s this evening, including the Grizzlies hosting the Warriors. We’ll be diving into this matchup and bringing you the best of our NBA props for tonight.

After a thrilling back-and-forth Game 1 that went down to the wire, the Golden State Warriors have another road date with the Memphis Grizzlies. This one tips off at 9:30 PM ET. Ja Morant is the primary focus of Memphis’ offense, as his electric shot-creation has propelled the team to new heights all season long. But, the Warriors are an experienced playoff team, so we can certainly expect them to limit Morant’s drives to the rim as much as possible.

The Warriors have sagged off of Ja in their last few meetings, which has led to great three-point volume for Ja than he’s accustomed to. This creates an obvious value on the superstar point guard to knock down a couple of threes tonight.

I’ve won eight article plays in a row after another cash the last time out. Let’s keep it going.

Ja Morant is a great player because of his outside shooting prowess. He’s a below-average three-point shooter. And, although it sounds ridiculous, that’s why there is value in this play tonight.

The Warriors’ defensive game-plan on Sunday clearly revolved around packing the paint in order to stop Ja’s drives. This was reflected in the box score for the entire Grizzlies roster, not only with Ja Morant. Memphis has played 89 games this season:

Meanwhile, Golden State possesses the ninth-highest opponent three-point-attempt rate, so the increased three-point volume for Morant and the Grizz looks to be sustainable for the series.

The Grizzlies and Warriors have faced off six times over the last year, dating back to the tail end of the regular season last May, and his sample confirms the Warriors’ preferred method of defending Ja Morant.

Morant is putting up 27.5 points per game across these contests but shooting just 30.2% from deep. Despite his low success rate, he hoisted up 7.2 3PA per game during this stretch. The third-year pro nailed 2.2 3PM per game in these meetings, knocking down multiple threes in half of them.

The Warriors are likely to continue conceding pull-up threes to this year’s Most Improved Player award winner. Ja went 3/8 on pull-up threes alone in Game 1, adding 1 make on 3 attempts on catch-and-shoot threes. If Warriors Head Coach Steve Kerr wants to let Morant enjoy some target practice again in Game 2, I like his chances to sink a few jumpers.

The NBA offers the highest level of basketball competition in the world. And, the most skilled players to ever grace the planet are the ones playing in the league right now. However, details as small as sight-lines and familiarity can still have a large impact on the game. This is easy to notice with Ja Morant’s shooting, for example.

The second-overall pick in the 2019 Draft shot a blazing 40.4% from three at home this season, compared to just 29.6% from deep on the road.

This has factored into Ja’s success as a shooter for his entire career, even dating back to his time in college. He shot the three-ball 4.2% better at home when he was at Murray State and has enjoyed a 2.2% boost at home during his tenure with the Grizzlies.

Since the All-Star break, Morant knocked down multiple three-pointers in 6 of his 9 home games. I have him penciled in for 6 or 7 attempts tonight, and some of those should be wide open.

Expect Golden State to go under ball screens and sag off of Ja Morant all night long. Look for the Grizzlies’ rising superstar to convert some of these open looks from deep at home tonight.