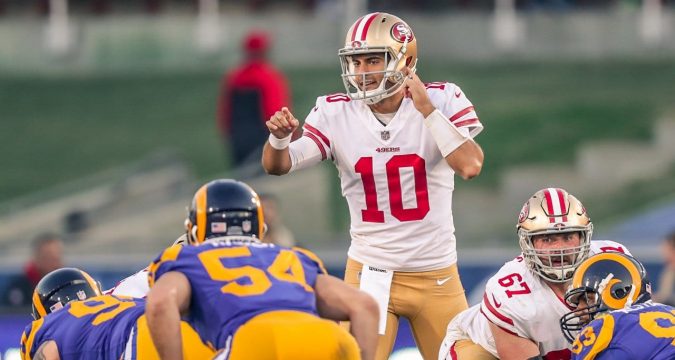 We’re back with one of our favorite NFC Championship props for Rams 49ers, telling you how to profit from Jimmy Garoppolo’s passing prop.

We’ve been profitably betting Garoppolo passing unders all year long, and we see no reason to slow down now. The 49ers have been hiding their QB all year long, and they’ll be doing the same this weekend for as long as the game script allows them.

Our subscriber picks are hitting 60% on NFL props and 62% on NBA props this year — join us here to get all the picks at the best prices and lines.

Jimmy G has hit this number more often than not over the entirety of the season (9-8 to the over), but whether it’s the injuries or the interceptions, it’s become clear in the playoffs that Kyle Shanahan & company want to limit his effect on the game.

Already battling a torn thumb ligament, Garoppolo also picked up a shoulder sprain in the Wild Card round against the Cowboys, saying it “affected every throw.” Then in last week’s win over the Packers, he had just 19 pass attempts, tied for his lowest total of the season.

As long as they’re not forced into comeback mode, the 49ers are going to limit his effect on the game and run the ball a lot. That’s not a new development, though; they’ve been doing it all year, it’s just hit new extremes in the playoffs.

San Francisco has been passing at levels well below expectation all year in every possible scenario, as you can see from the graphic above. And as run-heavy as they’ve been in the regular season, they’ve been even more dedicated to the ground game in the playoffs.

This will be the third matchup between these two teams, and Garoppolo has gone over once (316 yards) and under once (182).

Despite playing in a lot of high-scoring shootouts, the Rams have had good pass defense, grading out as the best pass-rushing team and 10th-best pass-coverage team. Their offense is also playing much slower over the last month as well, passing less and running more clock, which helps to keep opposing QBs in check.

Overall, LA has been one of the better QB under teams in the league for props, holding opposing QBs under their passing yards line at a 60% rate this year.

These are not quite the pass-happy Rams we saw in the first few months — they’ve certainly shown a more conservative side of late, and that’s a key reason why we’re seeing a relatively modest 45.5 point total for this one.

Garoppolo is probably not 100% healthy, and the 49ers are hyper-aware that bad things happen when they lean on him too hard.

Look for them to run it a ton as long as the game remains in neutral(ish) script, while there are reasons to expect the Rams to go slightly more conservative here as well, slowing down the complexion of this game considerably.