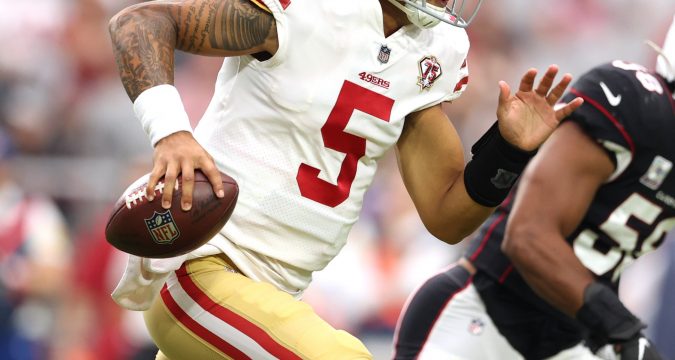 Thursday night’s season opener may have been disappointing from a competition perspective. However, we had ourselves a fantastic night, as Bet the Prop started the 2022 NFL season with a 3-0 sweep, highlighted by our Stefon Diggs play.

With a 14-game slate on tap tomorrow, we’re bringing you two more NFL Props for Week 1!

The 49ers are traveling to Chicago to take on the Bears, while the Saints are in Atlanta to face the Falcons — both games kickoff at 1:00 PM ET.

Of course, this is a small sample size. However, we do have a nine-game sample from 2021 that could prove quite meaningful for the angle on this under.

San Francisco enters Sunday as 7-point favorites over the Bears. And, frankly, I don’t think this line is high enough. According to Sharp Football Analysis, the Niners have the NFL’s ninth-best offensive line, and they’re going up against the Bears’ front seven, which is ranked 29th.

Conversely, the Niners have the second-strongest front seven, while the Bears’ offensive line comes in dead last at 32nd. Essentially, San Francisco should absolutely dominate in the trenches on both sides of the ball. Look for the Niners to control the clock and win comfortably, which brings us to our nine-game sample.

The 49ers won by more than 3 points nine times last season. And, it wasn’t because of their passing attack. Between Jimmy Garoppolo and Lance, the team completed under 17.5 passes in 6 of these 9 games last season, averaging just 17.2 completions per game.

Niners HC Kyle Shanahan has developed (arguably) the best running scheme in football. And, Doug Kyed of PFF reported a few weeks back that “a somewhat rough start to his time as San Francisco’s unquestioned starter would hardly be a shock.” Expected Shanahan and the Niners to ease Trey Lance into his role as the full-time starter, especially in Week 1 when they will be able to run all over the Bears.

Alvin Kamara is entering his sixth year in the NFL, and he remains an elite running back. With Jameis Winston ready to go, New Orleans’ offense should look much better to start the 2022 season than it did at the end of the 2021 season.

The Saints’ offense functioned at a far higher level when Jameis was their starting quarterback last season. They scored 6.3 more points per game with Winston, leading them to a 5-2 record to start the year.

However, having Jameis at the helm didn’t just help the Saints put points on the board. Having a competent starting QB did wonders for Alvin Kamara, specifically.

Kamara scored in 5 of 7 games with the former Buccaneers QB in 2021, putting up 6 total touchdowns during that stretch. The expected increase in offensive consistency this season should do wonders for the superstar RB’s scoring chances. He scored a touchdown in 8 of his 13 games last season, but reached pay dirt in 7 of 9 games when the Saints scored at least 14 points in 2021.

With the Saints’ team over/under at 24.5 points, look for Kamara to see plenty of red zone opportunities.

No Competition for Red Zone Touches

Kamara played four games with Mark Ingram in 2021. Here was the workload distribution in the red zone when the two backs shared the field last season:

Ingram didn’t even see a single touch inside the 10-yard line when Kamara was active. The 32-year-old backup shouldn’t be much of a threat to hinder Kamara at all this weekend.

Additionally, Taysom Hill will have a different (and smaller) role this season. When Sean Payton was the Saints’ head coach, he looked to feature Hill on an absurd number of snaps, especially in the red zone. The BYU product totaled a massive 13 rushing touchdowns over the last two seasons. But, he’ll be used more like a tight end under the Saints’ new staff.

The 49ers will likely wait to unleash Trey Lance this season. As long as they can hold a lead against the miserable Chicago Bears, the team should lean on the run game all afternoon.

Meanwhile, the Saints have a cakewalk matchup against the Atlanta Falcons, who just might be the NFL’s worst team this season. Alvin Kamara will be the featured back for an offense that should put up points with ease tomorrow, so an end zone trip should be within reach for number 41.

Enjoy playing these NFL Props for Week 1 and Join us for the whole NFL season!