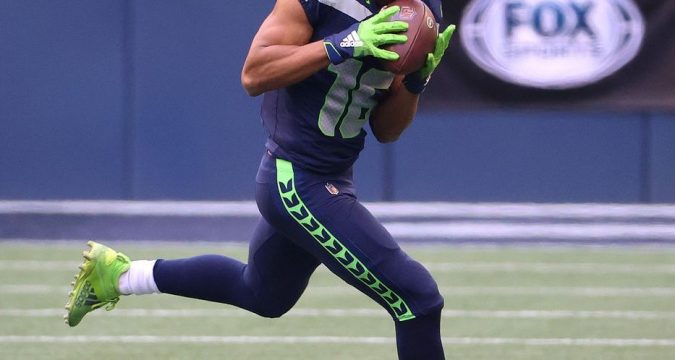 After a wild Week 1, we’re back to bring you one of our favorite NFL Props for Week 2.

The Seattle Seahawks are heading south to San Francisco to take on the 49ers in Levi’s Stadium – kickoff is at 4:05 PM ET. Seattle is riding high after a huge Monday Night Football victory over the Denver Broncos. Meanwhile, the Niners are coming off an embarrassing road loss to the Chicago Bears in a torrential downpour.

Unfortunately for San Francisco and for Seattle’s Tyler Lockett, plenty of rain is expected in Northern California this Sunday. Additionally, Seattle should shift toward more of a run-heavy offensive approach than what we saw on Monday. All in all, Lockett is not set up to have a great game, so we’ll be locked in on his props for Week 2.

Lockett has proven to be a talented receiver over the last few years, racking up three consecutive seasons with at least 1,000 yards and at least 8 touchdowns. However, Russell Wilson is gone, and that does not bode well for Lockett’s receiving outlook in 2022.

Lockett saw only 4 targets in Week 1, resulting in 3 receptions for 28 yards. That may seem like a disappointing game for the veteran wideout. But, it’s right around what we can expect from him with Geno Smith at quarterback.

As electric as it was to see Geno ball out on Monday night, we’d be fools to expect him to remain at that level all season long. There’s a reason he’s been a career backup for the last eight seasons. And, it’s unlikely he’ll be doing Tyler Lockett any favors this season.

Lockett failed to surpass the 35-yard mark in two of three games with Geno Smith starting in 2021. His lone explosion game vs. Jacksonville can certainly be labeled as an outlier.

Lockett’s 14.3% target share in Week 1 may be a bit low but is in the range of what we can expect in Seattle’s offense this season. DK Metcalf (25.0% target share) is clearly the top dog in Seattle’s WR room and is Smith’s favorite target.

The primary area of expected Week 2 regression comes in Seattle’s passing frequency. Geno Smith ranked top four in both Pass Rate Over Expected and Completion Percentage Over Expected last week. In other words, Seattle heavily leaned on the pass in neutral situations against Denver, at the same rate as the Kansas City Chiefs. But, spoiler alert, Geno Smith is not Patrick Mahomes.

Seattle dialed up 26 dropbacks on 1st and 2nd downs last week, compared to just 14 designed early-down runs. This 35% designed run rate is all but guaranteed to increase, as Seattle’s offense can be expected to be in the 50-50 range moving forward.

This decrease in volume surely doesn’t help Lockett this week. And, the rain in the weather forecast doesn’t look good, either.

The Niners only faced 9 targets to wide receivers in Week 1. This was by far the lowest mark of any team in the league, as the Tennessee Titans faced the second-fewest WR targets with 13.

It’s hard to judge the strength of San Francisco’s secondary based on this lack of volume in the Chicago rain. But, the team did make a splash in free agency this year when they acquired Charavarius Ward on a 3-year, $40.5 million contract. The Niners are undoubtedly entering 2022 with an improved secondary after struggling against the pass in 2021.

Lockett hasn’t had much success against the Niners lately anyway. Here are his numbers vs. San Francisco over the last four years compared to the rest of the league:

Additionally, the Kansas State product was terribly inefficient in Week 1. The 29-year-old ranked dead last in targets per route run out of all six Seahawks pass catchers. He was second-to-last in yards per route run, too. Geno Smith hardly looked Lockett’s way in Week 1, and he may look in his direction even less in San Francisco this week.

The Seattle Seahawks are quite likely to run the ball far more in Week 2 than they did in their season opener. And, with rain in the forecast, it may be difficult for Geno Smith and company to get anything going through the air.

Tyler Lockett didn’t produce in Week 1, and the arrow is pointing down on him again in Week 2.

Enjoy playing our best NFL Props for Week 2 and Join us for the whole NFL season!