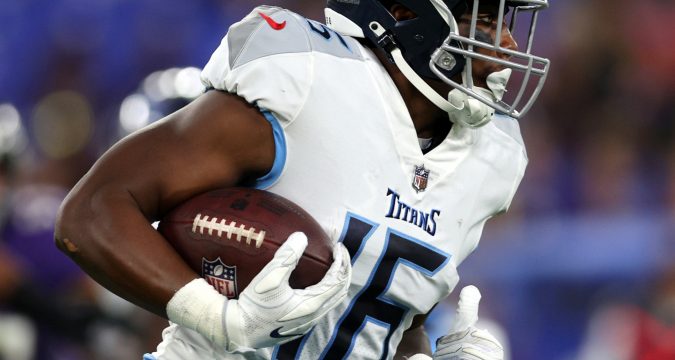 A spectacular NFL slate is lined up for this weekend and we’re bringing you one of our favorite NFL Props for Week 3.

The Tennessee Titans will be playing host to the Las Vegas Raiders on Sunday — kickoff is at 1:00 PM ET. Tennessee is looking to right the ship after a 41-7 loss to the Buffalo Bills and a last-second loss to the New York Giants. Meanwhile, the Raiders are searching for their first win of the season as well.

If Tennessee wants to avoid an 0-3 start, rookie wide receiver Treylon Burks should be essential to their offense this week. Burks has looked quite explosive and he has looked like Tennessee’s best pass catcher through a pair of games. He’s getting more and more involved as the season goes along, so his overs look like an absolute steal for Week 3!

Treylon Burks has already displayed his sky-high potential through just two NFL games. The rookie WR has put together performances of 3 receptions for 55 yards and 4 receptions for 47 yards.

Burks’ 47-yard performance on Monday Night Football was a tremendous sign of things to come. He got the start alongside Robert Woods and Nick Westbrook-Ikhine, and he asserted himself as Ryan Tannehill‘s top target immediately.

It appears as though Burks is locked into a starting role for the Titans moving forward. His big-play ability and explosiveness set him apart from everyone else in the Tennessee WR room. And, it seemed like the coaching staff came around on Monday night.

The rookie led the team in targets and receiving yards. But, more importantly, Burks did all of his damage in the first half before the game got out of hand. He played exclusively with the first unit and he’s built quite a solid rapport with Tannehill. Here’s Tennessee’s first-half target distribution from Monday night:

That’s an incredible 45.5% first-half target share for Treylon Burks. He also managed as many snaps early on as anyone else. It’s safe to say that Burks is Tennessee’s WR1 moving forward.

The Arkansas product has already flashed his amazing skills both before and after the catch. This has caused Tannehill to look his way more than any other player on the Titans roster, as Burks leads the team in targets through his first two games.

Despite averaging just 23.5 snaps and 14.5 routes per game, Burks’ 5.5 targets per game are quite encouraging. But, his yards per route run production is what truly sets him apart.

Burks is averaging 3.52 yards per route run thus far. Although this may not be a sustainable figure, it’s undebatably impressive. There are 81 players that have seen at least 10 targets through two weeks of action. Burks ranks 6th out of the 81 in YPRR. This type of efficiency is not a fluke.

If you weren’t already sold on the rookie wideout for Week 3, he draws the Las Vegas Raiders. Las Vegas has allowed three 50-plus receivers in each of their first two contests. The Raiders have even been torched by names such as DeAndre Carter and Greg Dortch to open their 2022 campaign.

Vegas has conceded the 6th most passing yards per game through two weeks. And, they’ve allowed the 10th-best opponent passer rating. They rank 7th-worst in expected points contributed by passing defense, and Tennessee should be able to take advantage of their weak secondary this Sunday.

As long as Tennessee throws the ball, Burks will be plenty involved. The Raiders don’t have a cornerback that can hang with him, so this matchup could set the rookie up for a legitimate breakout game.

Treylon Burks has emerged as the top dog in Tennessee’s wide receiver room, and this should appear even more obvious in the coming weeks. With a soft Week 3 home matchup against the Las Vegas Raiders, Burks is set up to have the best game of his young professional career, and we’re getting an awesome price on this line.

Enjoy playing our favorite NFL Props for Week 3 and Join us for the rest of the NFL season!