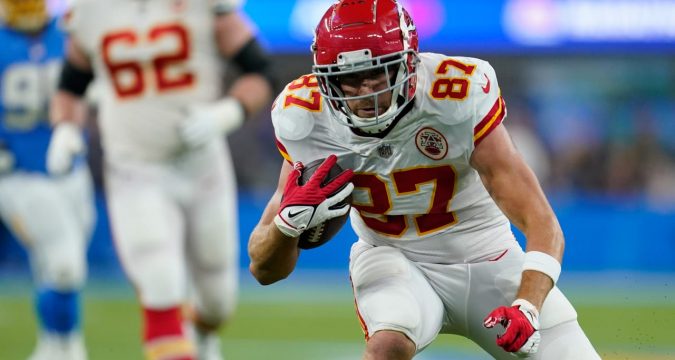 It’s been a rollercoaster ride for Travis Kelce’s receiving prop in the lead-up to Thursday Night Football.

Coming off another monster game in Week 1, Kelce’s Receptions prop opened at 7.5 earlier in the week. To be fair, that line looked optimistic, and it was immediately bought down by sharp bettors who suspected there might be some recency bias baked into that line.

So that under 7.5 receptions got hammered… hard. Maybe too hard, which brings us to our top prop for Thursday Night Football.

It’s surprising that a Travis prop Kelce would sink to a playable price on the 6.5, especially in primetime, which tends to attract more Over money, but here we are.

We certainly understand where the Under 7.5 bettors are coming from. Kelce is not getting any younger, and his snaps were down in the preseason and down slightly in Week 1 (64%). 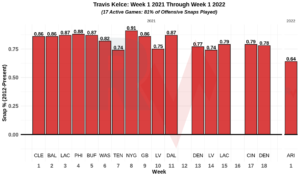 However, that game was never really competitive — Arizona waived the white flag by halftime and the Chiefs had no reason to run Kelce out there any more than necessary.

He still hit 8 receptions in that blowout, and with tonight’s game shaping up to be much more competitive, I’d be willing to bet on a snap count closer to 75% tonight (If only we could bet on snap counts… that would be the dream).

He blew by that mark in both matchups last year, racking up 24 targets and 17 receptions in two meetings with the Chargers.

Tonight’s game will not only be more competitive, but the total is sitting at a massive 54 points — if the most liquid markets are right, we’re going to see a ton of offense tonight, which puts Kelce squarely in play.

Then again, maybe we’re the only squares in play.

Chasing overs star players in primetime isn’t a recipe for Expected Value, but in this case, we think the market over-reacted and we’re happy to buy low on Kelce.